|In Foodie trips
|By Anna 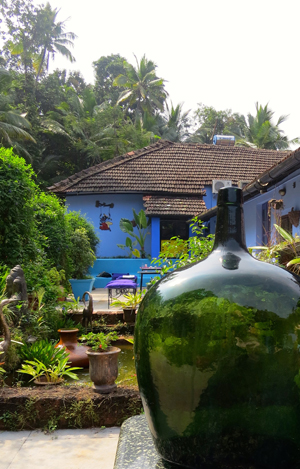 When our friends at Goa’s Casa Susegad offered to share their delicious pork vindaloo recipe with us, we jumped at the chance. But throw away any misconceptions you may have about this traditional Goan dish; rather than being searingly hot, it’s the perfect balance of spicy, sweet and sour.

One of the essential ingredients for the perfect vindaloo is palm vinegar (although it can be substituted for any strong fruit-based vinegar if you can’t get hold of it). It’s made by souring Toddy, which is the sap from the crown of a coconut tree.  The sap is collected daily by a Toddy Tapper, who climbs up each tree (often the height of a 3-story building) – arduous work. Barefoot and dressed only in shorts, Toddy Tappers are often easily distinguished by their huge, well-muscled hands.  The Toddy can be drunk fresh as a health aid, distilled to make palm feni, or kept to become palm vinegar.

Casa Susegad make their own palm vinegar. Their wonderful cook Joanita, whose own father was a Toddy Tapper, sources the Toddy, which is then stored in a huge glass jar known as a garrafao. It’s kept in a dark place for 6 months before being bottled for use throughout the coming year.

This recipe serves 12, any leftover portions will freeze well. 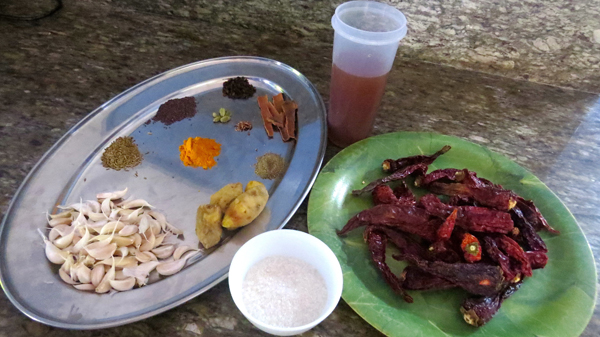 For the curry
1. Cut the pork into ½ inch cubes, including as much of the fat as you want; it does make the dish better if the fat is included.
2. Blend all of the marinade ingredients to make a smooth paste and mix through the cubed meat. Cover and leave in the fridge for 1–2 hours.
3. Fry the onions until light golden brown. Add the pork and all of the marinade. Cover and simmer until liquid is released from the mix. This is the point at which you have to decide on the thickness of your sauce.  Most times, you will not need to add any water, but if your mix is quite dry, add just a little water for cooking.
4. Simmer until the meat is soft and tender. 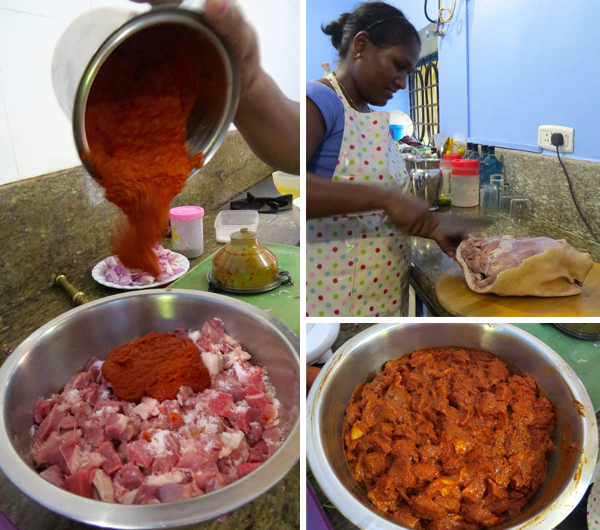 For the Goan pulau rice
1. Fry the onion in the oil until soft but not browned, together with the cloves, cardamom, cinnamon and garlic. When the onions are soft, add the tomatoes and fry until they are also soft. Add the crumbled stock cubes and stir through.  Add the rice and stir through over a low heat.
2. Add the measured water and bring to the boil. Simmer over a very low heat until the water is absorbed and the rice cooked. Check for seasoning and add salt if necessary (this depends on the salt in the stock cubes). 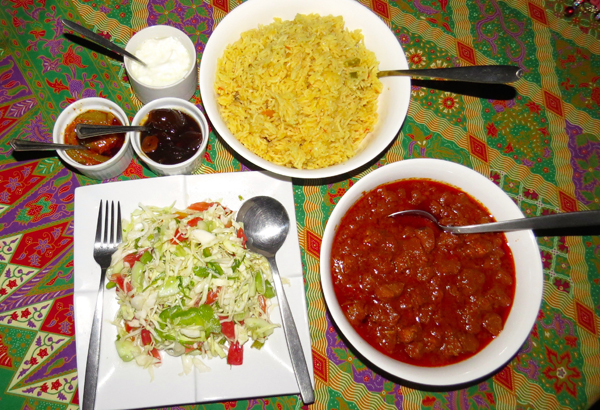 And finally… serve the vindaloo with pickles and curd (yoghurt). The curd will cut through the heat if anyone finds the dish a little hotter than they’re used to.