Travellers tales in the summer of Covid

Many of our i-escapers have been travelling abroad recently, and we were interested to find out what it’s really like travelling in the era of Covid-19, whether by plane, ferry or train.

Here they share some of their experiences of journeys to Europe, from Eurostar to Easyjet.

Only passengers were allowed into Heathrow’s Terminal 2.  Everything was immaculate and clean with hand sanitisers and masks available free of charge at the terminal door. The airport was very empty with socially distanced queues to check in, so it took a little longer than usual. Everyone was wearing a mask. Had to show our ‘QR code’ allocated by the Greek government, on completion of our Passenger Location Form (PFL), compulsory to gain entry to Greece.  Passports handled by staff with gloves. Luggage wrapping services close to the check in desks were being used by a few more people than usual. Security normal – you pull down your mask for photo. Inside the terminal (airside) plenty of sanitiser stations and seating areas with cordoned off seats for social distancing. Water fountains open so you could fill up bottles. Not many shops open (Duty Free is a big disappointment as no free cosmetics testers!).

Flight was busier than expected but everyone mask compliant. Handed a packet with sanitising wipe as we boarded the plane. No cabin service, just a bottle of water provided on our flight to Frankfurt. No problem using loos – I saw the crew cleaning the loo but strangely no sanitiser provided. If you were staying in Germany you had to fill out a location form, but not if in transit. Frankfurt Airport again very clean, with spaced seating and plenty of hand sanitiser stations.  There were messages to remind everyone that masks are compulsory and security guards checking that masks were being worn correctly. Takeaway food only with socially distanced queues. Our flight onto Heraklion was longer so we were given a sandwich and water. 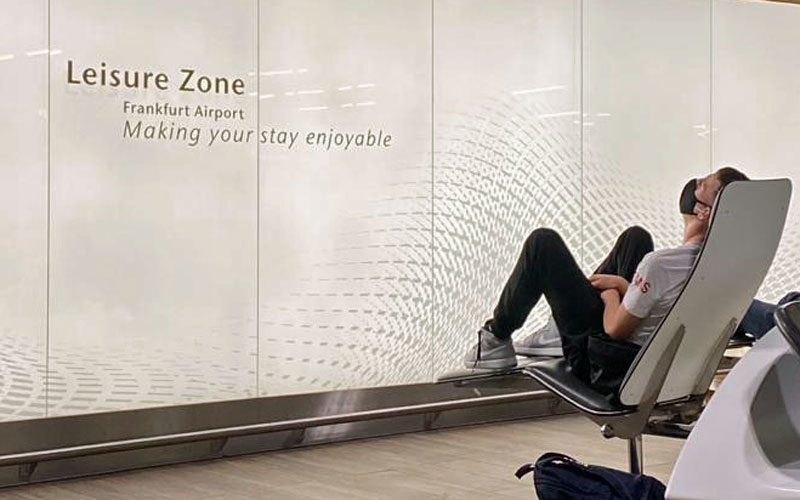 On arrival in Crete, met by Police and had to show them our PLF QR codes. There were temporary Covid testing sites set up with medical staff in full PPE. I understand arrivals from certain countries need to undergo a test and go into quarantine until results come through. We didn’t have to.

To return to London, we had to fill out a UK PLF online in advance (easy to complete but needs to be done within 24 hours of arrival) and checked when checking into our flight in Heraklion. Everyone wore masks in the airport. Some delays as the queue took longer than usual – especially when people didn’t have their PLF completed. Return flight slightly less full. Once we arrived back in Heathrow we passed through the automatic gates and didn’t have to show our PLF, but it may be that it had been linked to our passport digitally. Baggage reclaim much quieter than usual and we exited quickly. 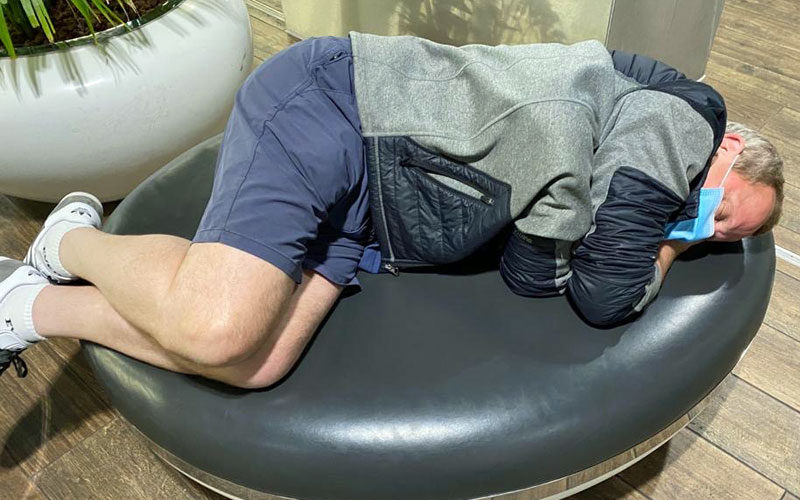 Absolutely worth going. We were very impressed and reassured by the safety measures put in place by UK and Greek Governments. The added advantage of reduced numbers of holiday makers on the beaches and in restaurants meant everywhere was very accessible and quiet, our time much more relaxed and less stressful than normal. I would highly recommend travelling to Greece. We booked a car, shuttle service in a minibus, masked driver and S.D. seating applied here, the car was sanitised before use. All staff in shops and restaurants wore masks. We didn’t have to wear a mask while out and about but you were expected to wear one in food shops. When I went in without I was asked to put one on; in one gift shop I was told by the shopkeeper that she would be at risk for EU100 fine and there were regular checks by police. All shops, changing rooms and toilets had hand sanitisers. We felt more comfortable staying in a villa rather than a hotel and being in our own space meant we didn’t have to wear a mask. After lock down this has given us the break we so desperately needed. 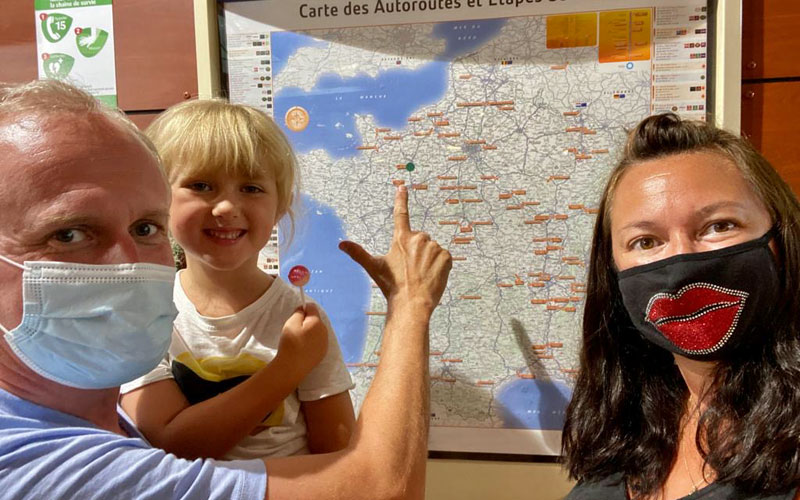 We drove straight onto the ferry so didn’t need to pass through the terminal. There were hand sanitiser stations. People were considerate when it came to social distancing. Shops and cafes were open but the soft play area wasn’t. We were required to fill in a document to confirm we had no Covid symptoms prior to boarding. As the driver, I had to sign and be responsible for the household’s declaration in the UK.

The ferry was pretty busy. Tables & seats were socially distanced with some unavailable to maintain space. The cafe was self service.  Face masks were compulsory if you were moving around but when sitting down you could remove them; staff were wearing them. Children were not required if under 11.

Super quick off the ferry, just a passport check and handed the form in.

We had to fill in a form 48 hours before we entered the UK, which took about 10 minutes. Once completed you have to download it (they also email it) and then show it on entry to the UK. I had to add my daughter to my form. Needed passport details, and ref no for the Eurotunnel, address of where you will be on the return to the UK.

In France you have to wear masks to enter restaurants and shops.  They tell you to leave if you don’t have one on, but they can be removed once you are sitting down and you don’t have to wear it around the pool or on the beach. There is hand sanitiser everywhere, including the children’s playground entrances and restaurant entrances.  Have your mask with you at all times.  We didn’t see any shops or restaurants that offer masks, so make sure you bring your own. Absolutely worth the efffort/slight change of plans for the sunshine, sea, sand and family time. 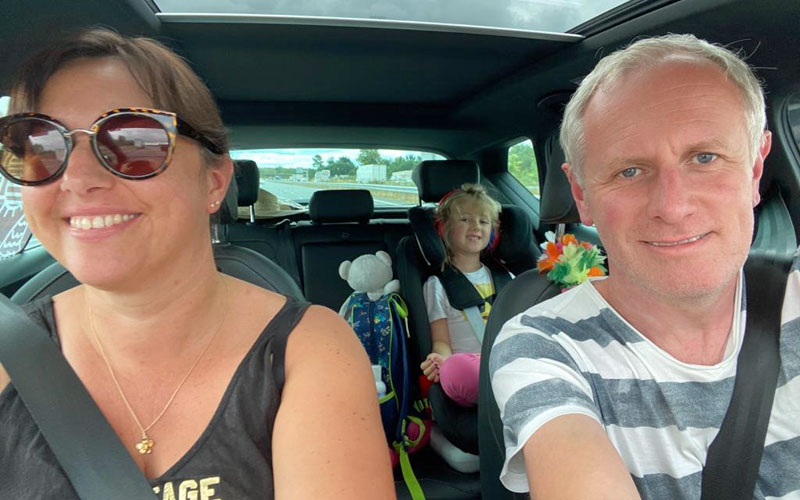 There was a big queue outside Bristol airport to avoid overcrowding indoors. We had to present the PLF (Passenger Location Form) document twice in the UK airport and then again upon arrival in Athens. No one touched my passport/boarding pass, I was asked to scan them myself at every stage.  There was a temperature scanner entering the airport and some hand sanitising stations but not as many as I’d like, so I had to rely on my own. Masks are compulsory in the terminal.  Some cafes were open but not the airport lounges.

The aircraft was fully booked with no possibility of social distancing, but everyone wore their masks which was compulsory.  No hot food was served, just pre-packaged snacks like crisps and chocolate.

This took longer than usual because we had to stand up and leave row by row to avoid crowding in the aisle. Despite reading in the Greek media there are Covid tests at Athens airport with the results in 2 hours, I didn’t see that happen.

Definitely worth going on holiday. The atmosphere is relaxed.  Just don’t forget your masks and sanitiser!  Have at least 3 masks per person (airlines recommend replacing them every 4 hours), wash them frequently and iron them.  Some Greek establishments sanitise chairs/tables more than others so bringing wipes for your chair might be good for your peace of mind. My experience in Athens and Evia hasn’t been dramatically different this summer with the exception of masks required indoors. Bars and tavernas have less tables so are more spread out making it more comfortable than before.  Booking a table is advisable to avoid disappointment. 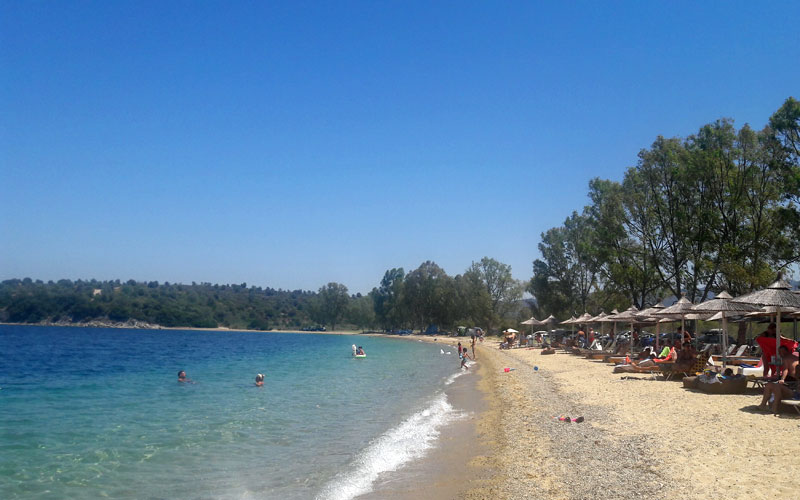 Heathrow Terminal 5 was very quiet. After checking in bags, we went straight through security without any queuing.  We were flying business class and waited in the lounge before boarding. We ordered food and drinks via a QR code. Masks were worn at all times in the airport, all staff wore them too. Plenty of hand sanitiser stations.

The flight was about a quarter full so no queuing and no-one was within 2 rows of us. We were given a “hygiene pack” on boarding with a sachet of hand sanitiser and an anti bac wipe. Flight attendants wore masks, we were expected to as well, everyone did. Breakfast was served in a box (croissant, fruit and juice) and drinks as normal. We were allowed to use the loo but asked not to queue in the aisle.

We were asked not to stand until our row number was called, then disembarked 4 rows at a time. We had to fill in a form giving details of the first place we were staying (one per passenger). They took the temperature of one person per family. Taxi drivers and families collecting arrivals had to wait outside the terminal.

Barcelona airport was fully open but quiet so no queueing at check-in or security. Some hand sanitiser stations empty. Signs limiting numbers of people in toilets but it was so quiet there was no way of knowing if people would have complied. The flight home was busier (probably half-full) as BA had cancelled other flights to London. Boarding gate was the usual scrum but we held back, boarding last. We had to fill in a UK Government “contact locator” form online which we showed on our phones at UK passport control (queue was busy but staff tried to keep people moving).  No temperature checks at Heathrow. Transit from plane to the terminal was fairly busy, felt odd being in a crowd for the first time in months.

Travelling was far less stressful than normal as so few people around. BA dealt with the situation brilliantly. They provided sufficient information about no loitering in the aisles etc without scaremongering. We had a fabulous holiday in Spain. We were self-catering so were able to keep ourselves to ourselves. We did eat and drink out, not many places had the QR code system but all waiting staff wore masks. We ate and drank outside, many eateries only allowed you inside to use the loo. Mask wearing was compulsory in all public places but not on beaches. A really positive experience despite now being in quarantine for 14 days! 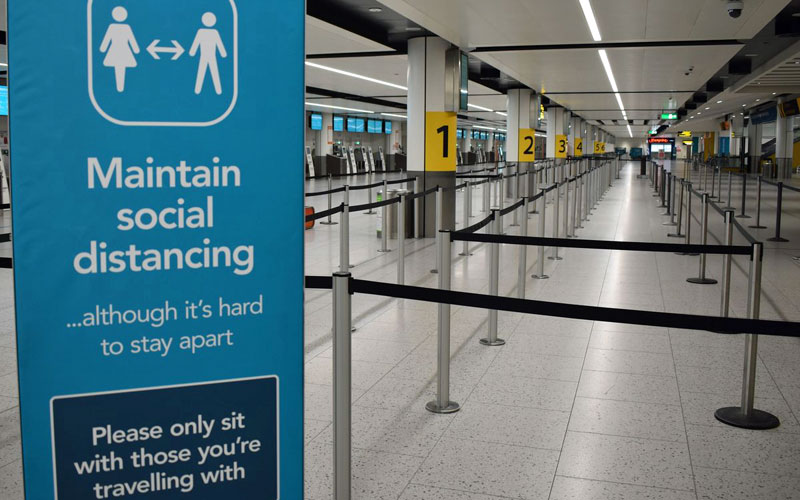 At the station and queues, staff were enforcing social distancing. Travellers generally compliant with the rules but although it was compulsory to wear a face mask, some didn’t. Security was very quick and easy to get through, the officials called out carriages one by one, so less risk of contamination. There were sanitiser stations after every queue.

Boarding and the journey

There were surprisingly few passengers in the carriages. Everyone we saw wore a face mask and there was air conditioning on the trains (thank you, Eurostar!) so my nose didn’t get sweaty. No food or drink was served on the train although the toilets were available. All staff wore masks. My seat was supposed to be away from my parents, but through negotiation, we were able to swap and sit together as a family.

Upon arrival no checks – we were free to go apart from wearing face masks in the station.

There was a form asking where we had been and where we were going to stay for the next 14 days but no other Covid measures in place. 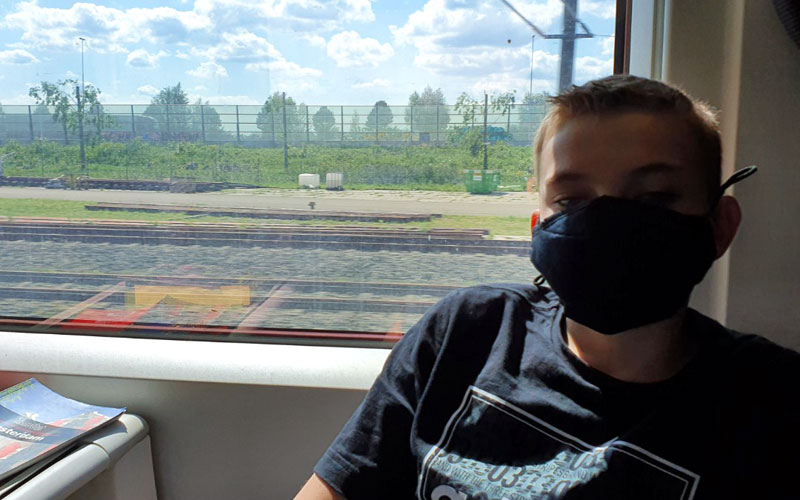 Click to see our full European collection of hotels and hideaways

The Best New Family Hideaways of 2020