Why Asturias isn’t more well-known is beyond us. It’s got some of the best scenery in Spain and amazing cuisine, yet it remains uncrowded, untouched and undiscovered. So, we’re spilling the beans… 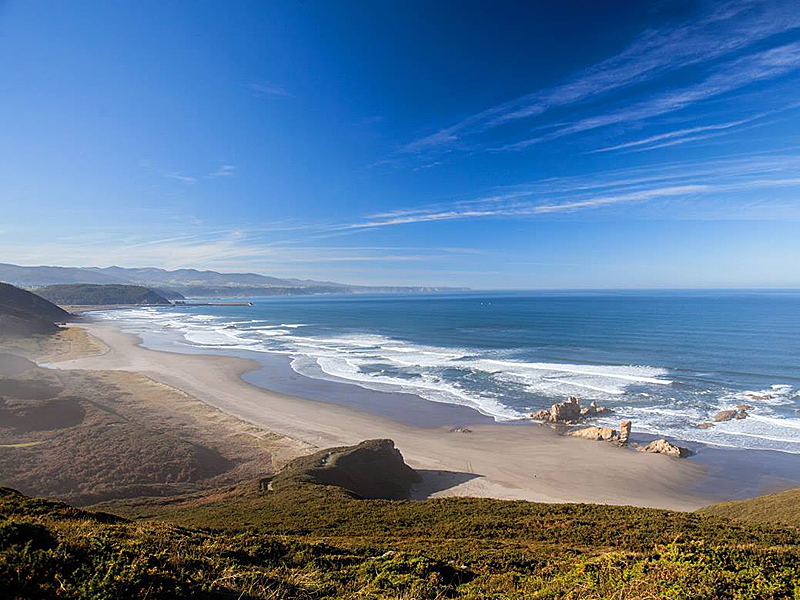 Asturias boasts the spectacular Costa Verde (Green Coast), a dramatic stretch of coastline with soaring cliffs, woodland and secret white-sand beaches. The famous Camino de Santiago pilgrimage route runs right through here, so hiking and cycling trails are stunning. And the lack of development means you can go hours without seeing another soul.

Best beaches?
For a lazy day at the seaside, Arenal de Moris in Caravia has a wide sandy beach and a cute bar and restaurant, though it can get busy in summer months. To escape the crowds, try Playa de Vega in Ribadesella – hard to get to, but the white sand backed by rugged green hills makes it worth the journey. For a beach stroll, Playa de la Griega in Colunga has a circular trail that takes you along the coast and through woodland – lookout for fossilised dinosaur footprints along the way. For safe swimming, Cadavedo has calm, sheltered waters.

Best part of the Camino?
The stretch from Ribadesella to Sebrayo (33km) is particularly beautiful, with outstanding views of cliffs and beaches on your right and the dramatic Sierra del Sueve on your left. Don’t expect super well-maintained walkways though – the paths are rugged, natural and untouched: one of the beauties of this part of the world. 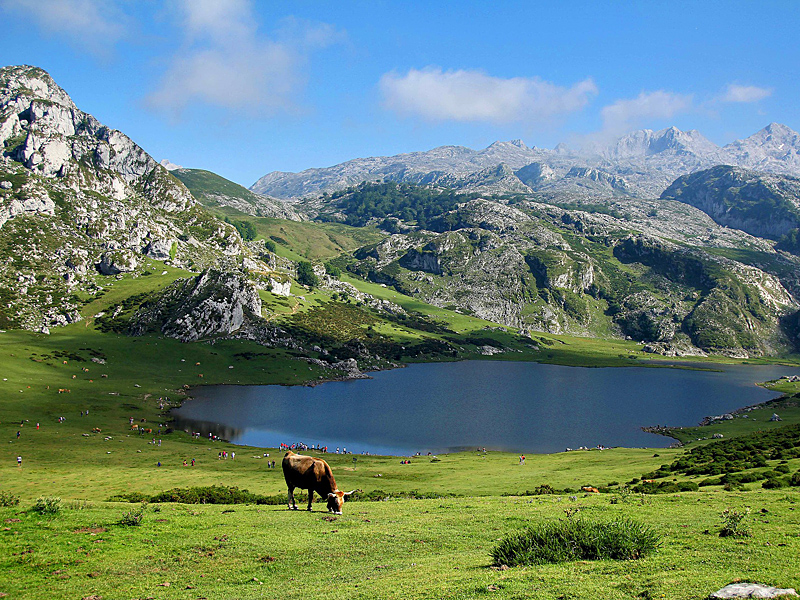 Asturias has no fewer than 24 nature reserves, including three of Spain’s largest national parks. The most famous of these is the mighty Picos de Europa, a mountain range wedged between three river gorges. Naturally, it’s a hugely popular hiking spot, but there’s so much more incredible scenery in the region that fewer tourists know about. Look out for pre-Romanesque architecture hidden away in the hills: relics of the old Asturian kingdom.

Best nature parks?
Ponga and Redes, both UNESCO Biosphere Reserves. They are stunningly beautiful and much less crowded than the Picos. Click here for suggested walks in each park.

Best archaeological sites?
Some of the best Pre-Romanesque ruins can be found along the Navia River in western Asturias. You can take a tour of several of them, like Castro de Coaña and Chao San Martín. Further east, the Tito Bustillo Cave in Ribadesella has pre-historic paintings thought to date back as far as 10,000 BC. 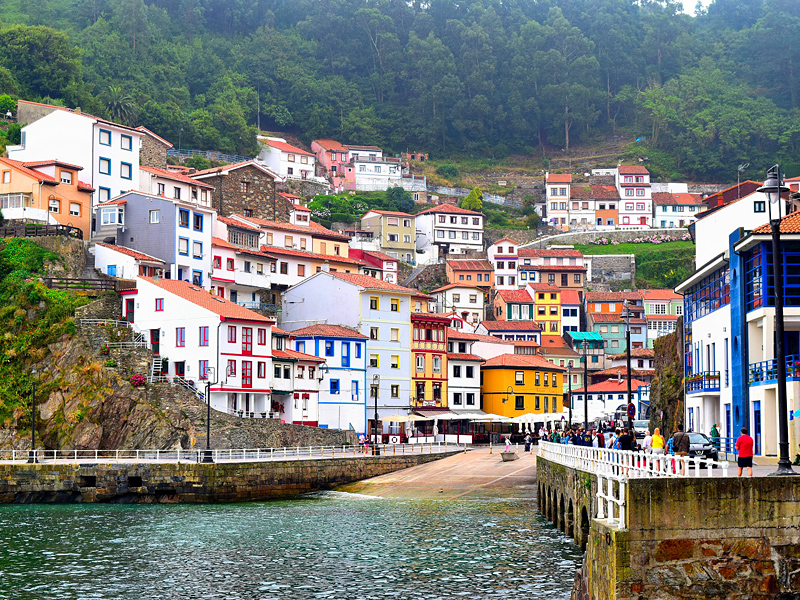 Asturias isn’t a built-up region, so don’t come expecting glitzy metropoles. Pretty Oviedo is the capital, home to a charismatic old town with pastel-coloured architecture and a lively student scene. Gijón is the larger, grittier sister, an industrial coastal city that suffered gravely in the Spanish Civil War, though has blossomed in recent years. But mostly, Asturias is a region of quaint fishing villages clinging to the cliffs above sleepy coves. Don’t miss Lastres, Tazones, Ribadesella and Llanes.

Best sights in Oviedo?
The old town is the most beautiful, particularly the Gothic cathedral, the Fontán Market and the 19th-century Campoamor Opera House. The Archeological Museum of Asturias is also well worth a visit, as is the Fine Arts Museum of Asturias. Look out for pre-Romanesque buildings as you wander, like the churches of Santa María del Naranco and San Miguel de Lillo (UNESCO World Heritage Sites). 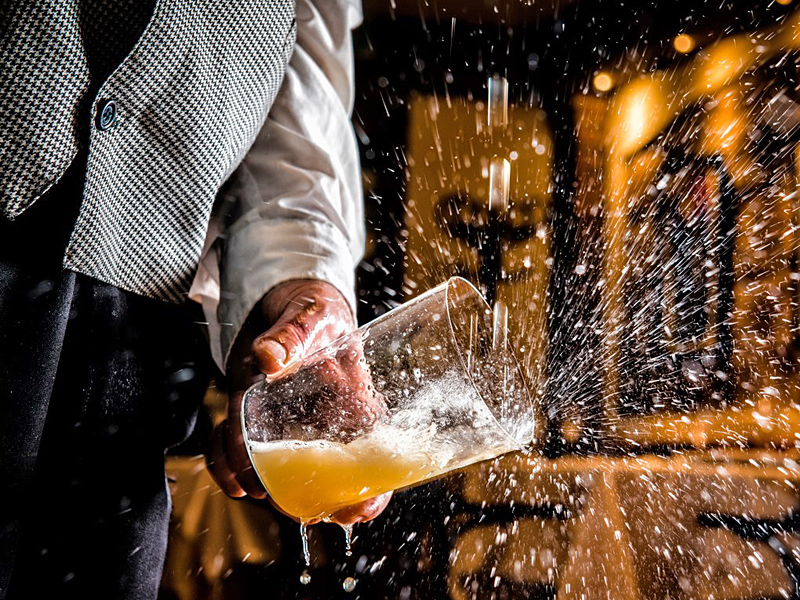 The Asturians are proud of their produce and for good reason. The region is the Spanish home of cider, the producer of around 40 different cheeses, and the supplier of an astonishing array of fresh seafood. Meals aren’t for the fainthearted; one of the most popular dishes is fabada, a rich stew of blood sausage, salt pork, chorizo and fava beans. High-end eateries and Michelin-starred restaurants can be found across the region. And to celebrate such a great culinary scene, there’s no shortage of food festivals throughout the year – everything from hazelnuts to wild mushrooms.

Best seafood to try?
Hake is popular year-round, as is monkfish and octopus (try Pulpo a la gallega). During the summer, locally-caught white tuna is delicious and features on most menus. Make sure you try the shellfish too; there’s incredible variety on offer, including sea urchins, goose barnacles, spider crab, clams and razor clams.

Best cider?
Traditional Asturian sidra natural is all made in the same way so doesn’t vary a huge amount in taste, but Viuda de Angelón and Trabanco are reliably good and can be found in most shops. If you want to learn more about the production process (very interesting), Sidra Cortina in Villaviciosa offers guided tours with tastings. The best time of year to visit is October/November, during the apple harvest. 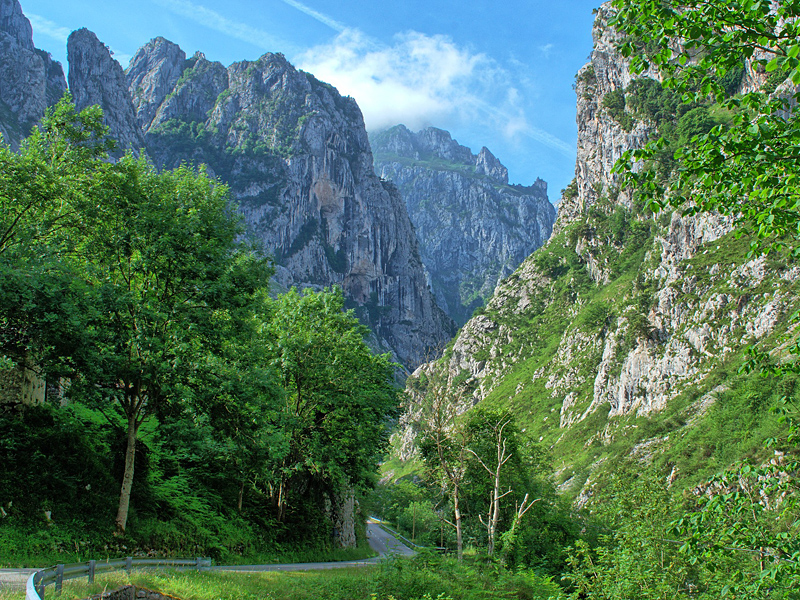 It’s hard to get anywhere quickly in Asturias, and you wouldn’t want to anyway – there’s too much to see! The coast has just one main road running through it, and if you turn inland be prepared for winding mountain roads. If time is no object, the FEVE railway line, which is unmarked on most Spanish railway maps, is a wonderful way to get around. It stops in all the key places, including Oviedo, Gijón, Llanes and Ribadesella, passing through magnificent scenery as it skirts beaches and crosses rivers.

Best time to go?
Late spring and early autumn are particularly lovely times – the former for spring flowers, the latter for the harvest. November is great for autumn colours and walking, particularly in the forests of Peloño in Ponga. Be aware that it can rain at any time of the year, including summer. They don’t call it the Green Coast for nothing! 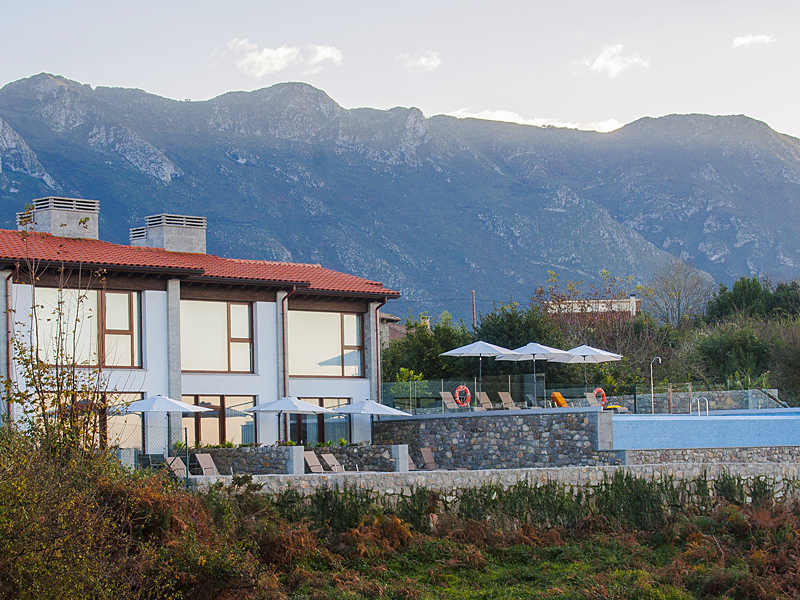 Asturias has lots of lovely rustic options with bags of character and friendly owners bursting with passion for their region. To the west of Gijón, Hotel Torre de Villademoros is a former 18th-century mansion with a medieval tower you can sleep in. Turning inland, El Gran Sueno is a great option for hikers thanks to its position overlooking the breathtaking Picos de Europa. When you seek rest, head east to Casa La Calma, near Ribadesella, where the focus is on well-being. Then continue to the Bufones de Pria Apartments, a haven of calm beside one of Spain’s most spectacular natural wonders.

Click to see all our places to stay in Asturias