Exploring Singapore and the Malaysian islands

|In Beach escapes, Our trips
|By Anna 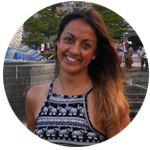 An appetite for adventure inspired my first trip to Southeast Asia, but this incredibly diverse region has so much to offer that I didn’t know where to begin when it came to choosing a specific destination. I asked around the i-escape office for some advice, and Editor Liz fondly reminisced about her time in Malaysia. I was sold.

I planned a route that would take me cross-country from Singapore to Kuala Lumpur and then on to Penang, with stops at a few island hideaways along the way. It soon became apparent that three weeks wouldn’t be anywhere near enough to see all the colourful sights (or try all the food!), but I endeavoured to make the most of every second.

I landed in Singapore bleary-eyed yet determined to explore. En route to my hotel, my taxi passed elegant buildings that jutted upwards towards the sky; nose pressed against the window, I watched the setting sun dance on their banks of glass. 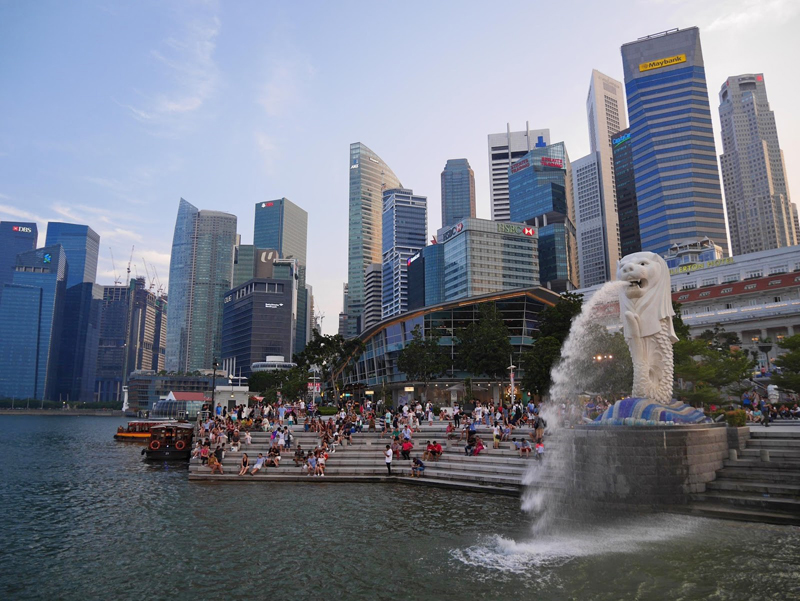 The city is the birthplace of the infamous Singapore Sling, which has inspired all manner of rooftop bars where you can sup cocktails overlooking the impressive skyline. I opted for Smoke and Mirrors, hidden on the top floor of the national gallery. 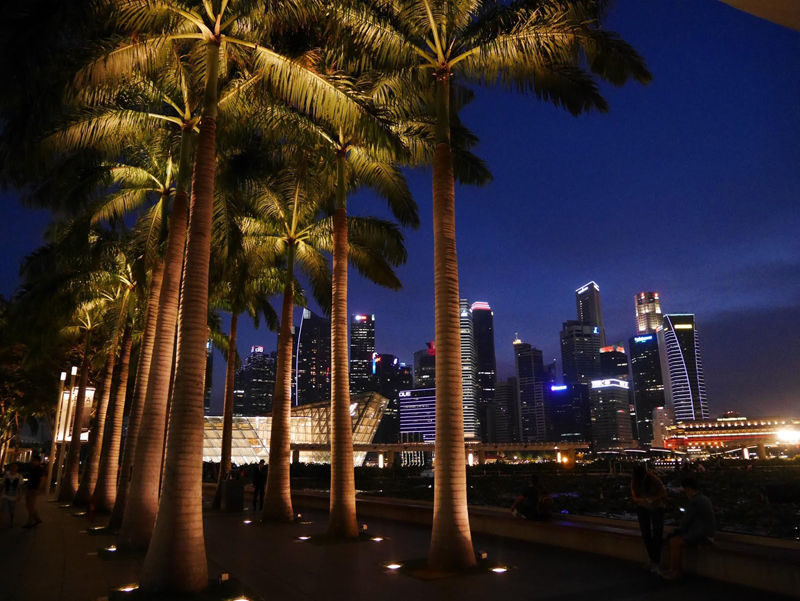 With just one full day in the city, I hit the ground running the following morning. I began by getting lost in the Gardens by the Bay, weaving between multi-coloured beds of orchids (the national flower). I also visited Sentosa Island – the southernmost point of continental Asia – and caught some of the parades and performances laid on to celebrate Singapore’s national day. After dark, I explored the Night Safari (the world’s first nocturnal zoo set in 86 acres of tropical rainforest) and marvelled at the view from the top of Singapore’s iconic 3-tower hotel Marina Bay Sands. 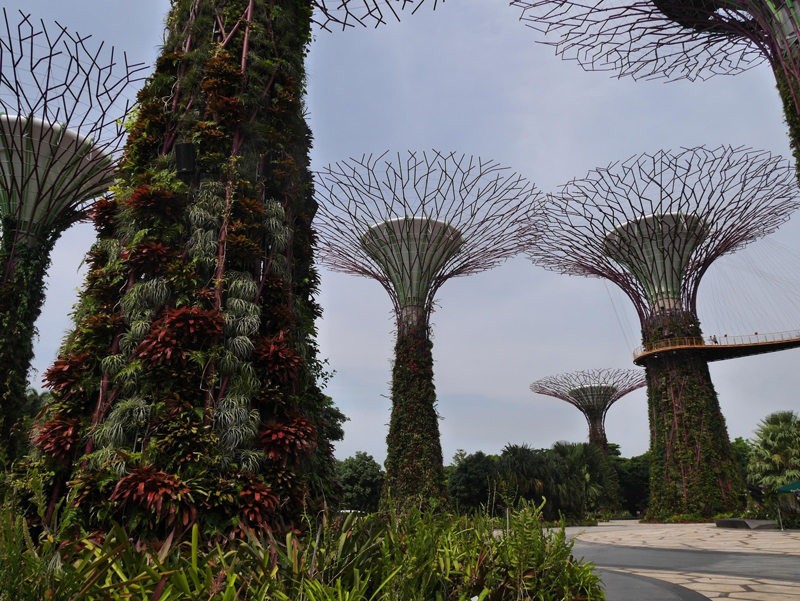 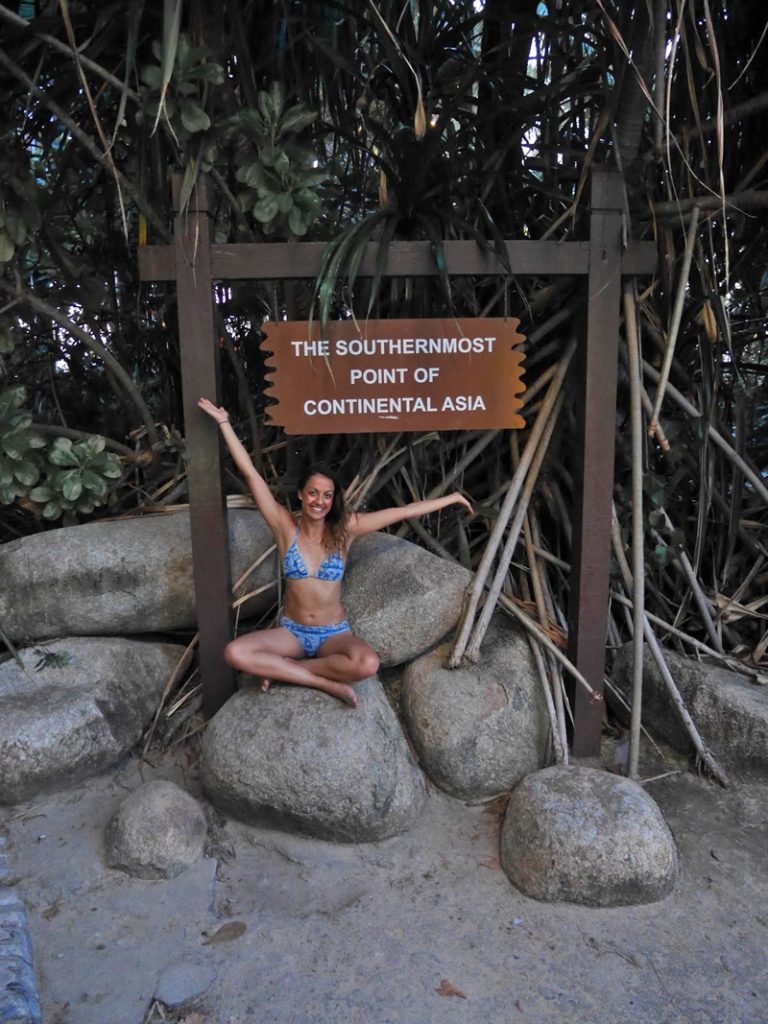 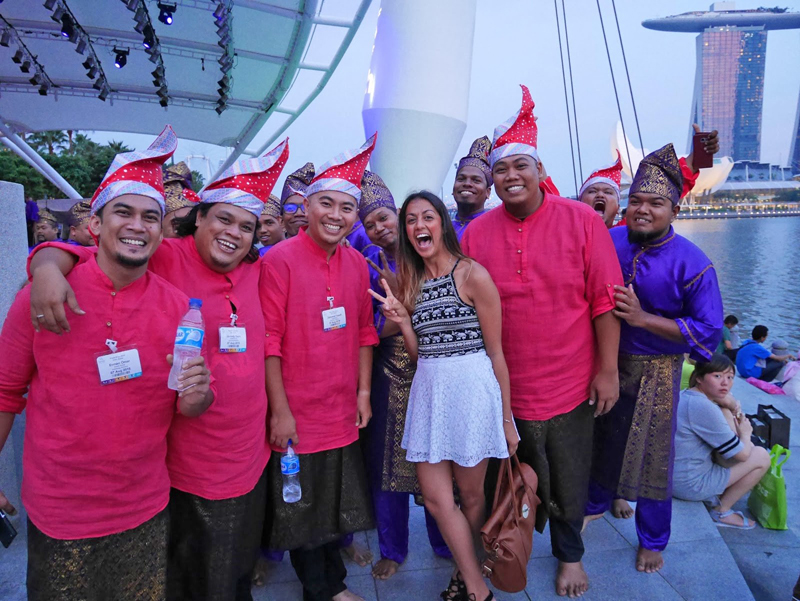 My next stop was Batu Batu, a private island a little way across the Malaysian border that’s only accessible by speedboat. Stepping onto the jetty, my jaw hit the floor: words can hardly do justice to the beauty of this tropical hideaway. 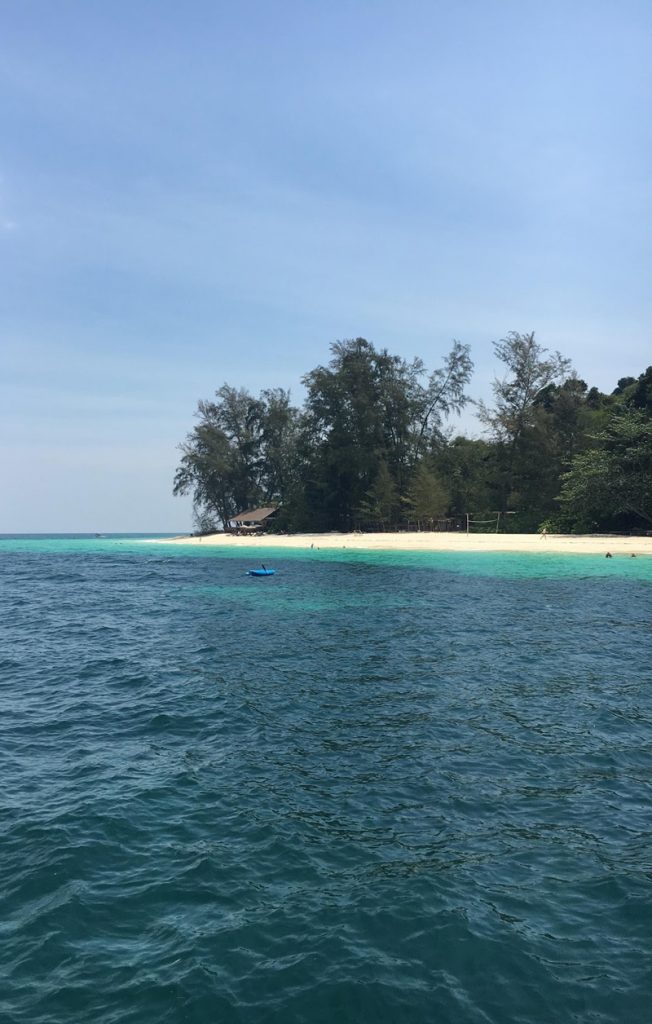 Manager Bala met me with a huge smile and showed me to my teak-wood villa, one of just 22 on the island. Its sprawling four-poster bed looked out over Sunrise Beach, where I spied palm trees swaying in the breeze, and a vast stone tub sat proudly in the outdoor bathroom. 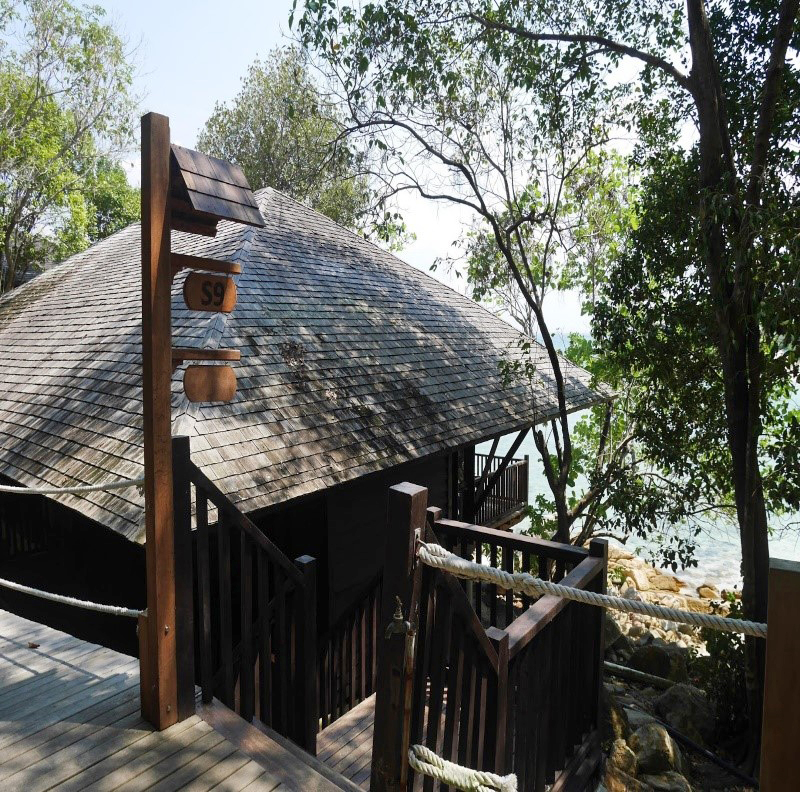 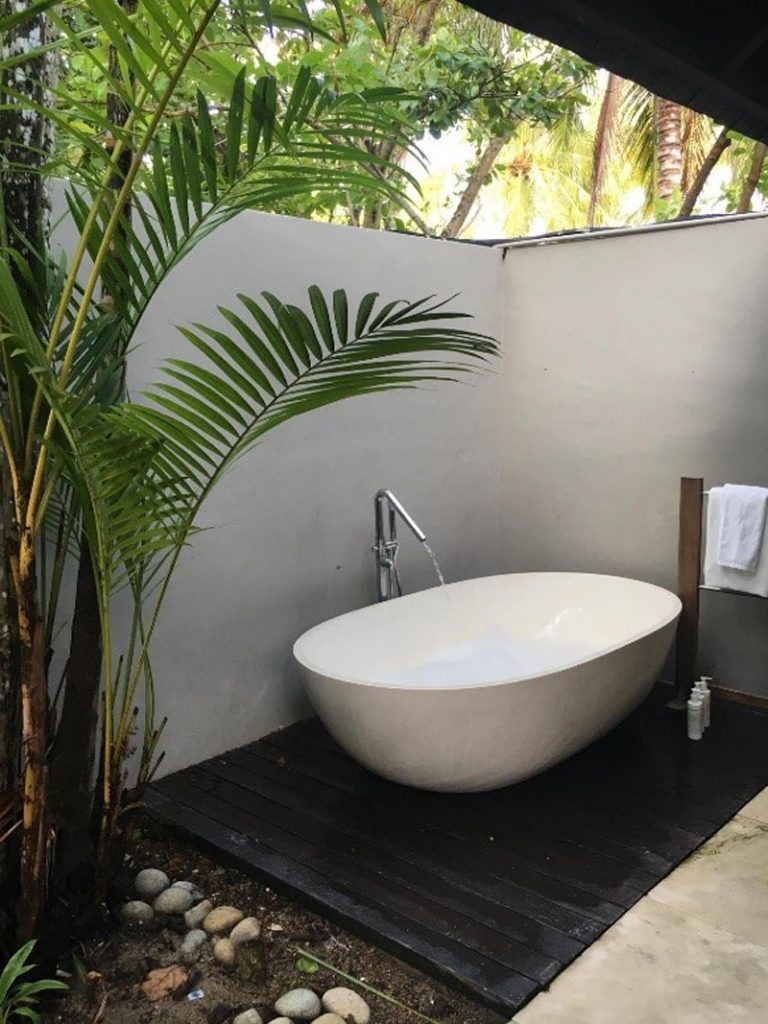 The following three days were wonderfully relaxing, and the only decisions I had to make were whether to watch the sunset from the restaurant or beach bar, and which of the island’s eight white-sand beaches to visit next (my favourites were Long, Angsana and Sunset). I also spent time exploring the coast by paddleboard, and snorkelling over the unspoilt coral reef. 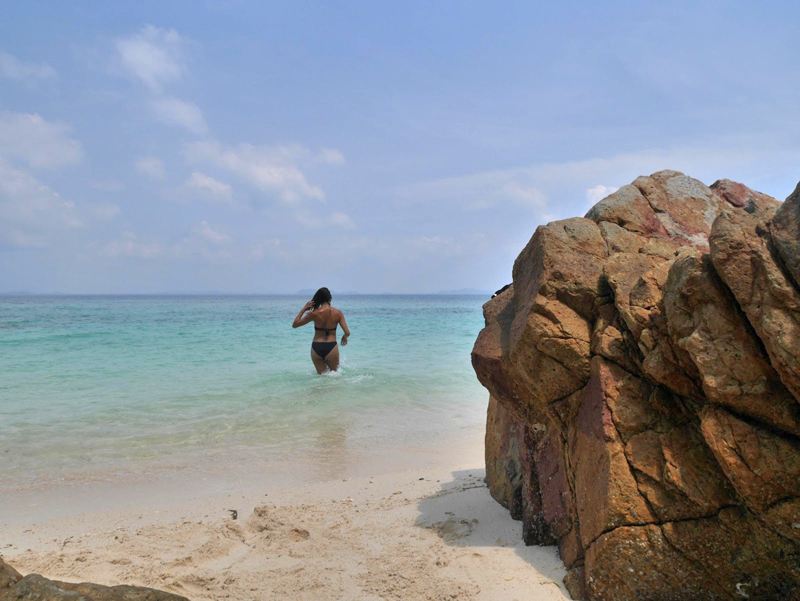 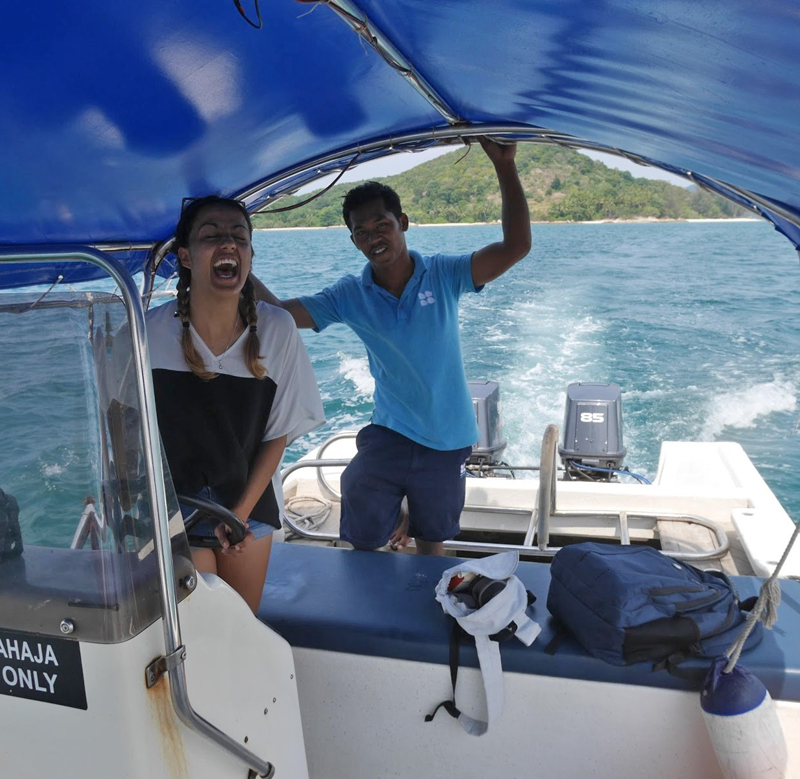 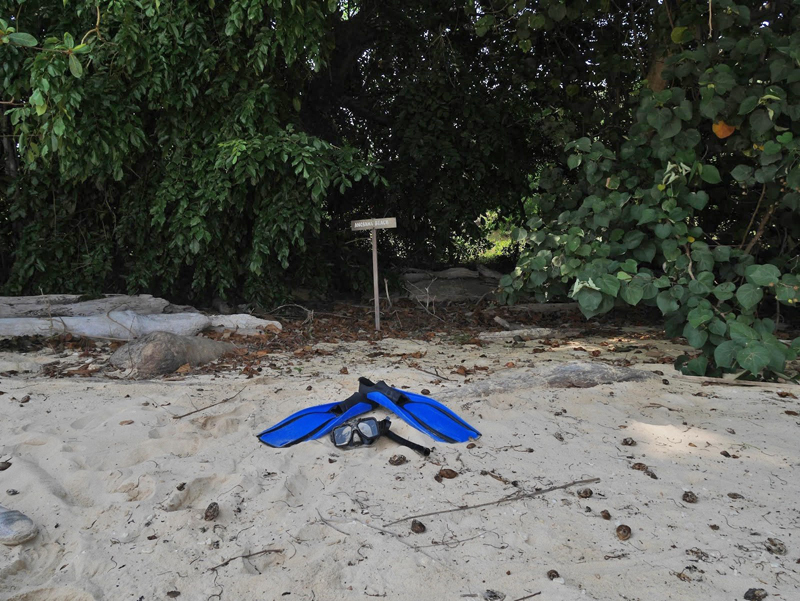 One of my highlights was seeing baby green turtles being released from the island’s conservation centre. Standing on the beach to watch hatchlings scuttle into the surf and disappear beneath the waves was spine-tinglingly magical. 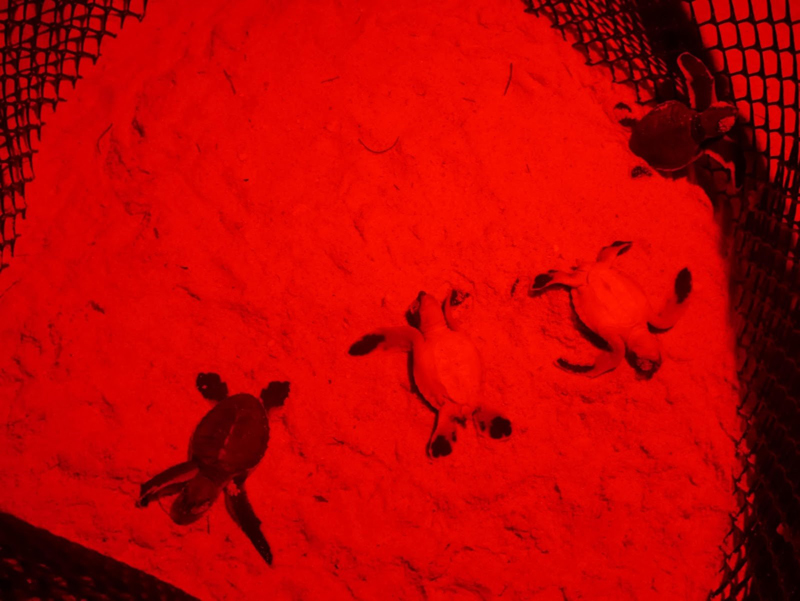 I wish I’d had time to test out the PADI dive centre, but the afternoon I’d set aside for my first scuba lesson saw a rather spectacular thunderstorm. Oh well, I’ll just have to go back again… 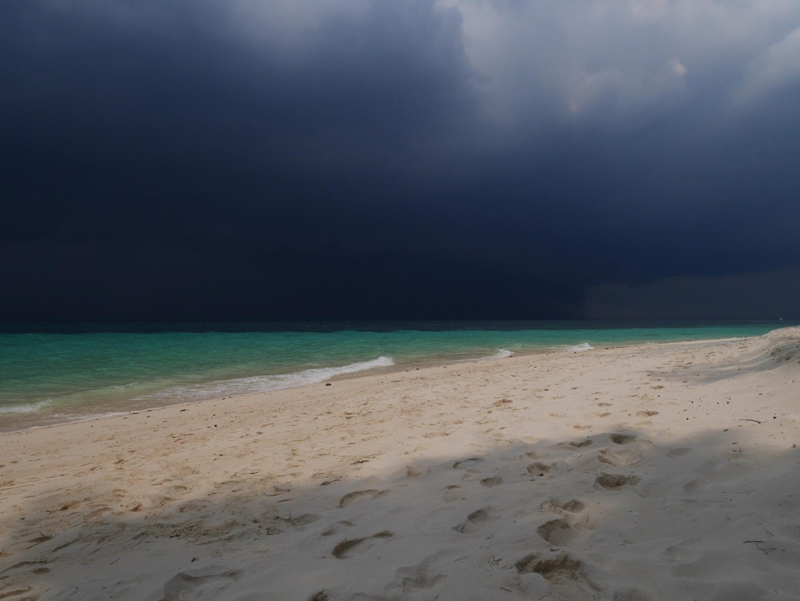 Batu Batu is a place to go completely off-radar, and I tore myself away feeling completely restored.  Two speedboats and a ferry later, I found myself drifting into another beautiful cove, this time on jungle-covered Tioman Island, which is home to super-romantic resort Japamala. 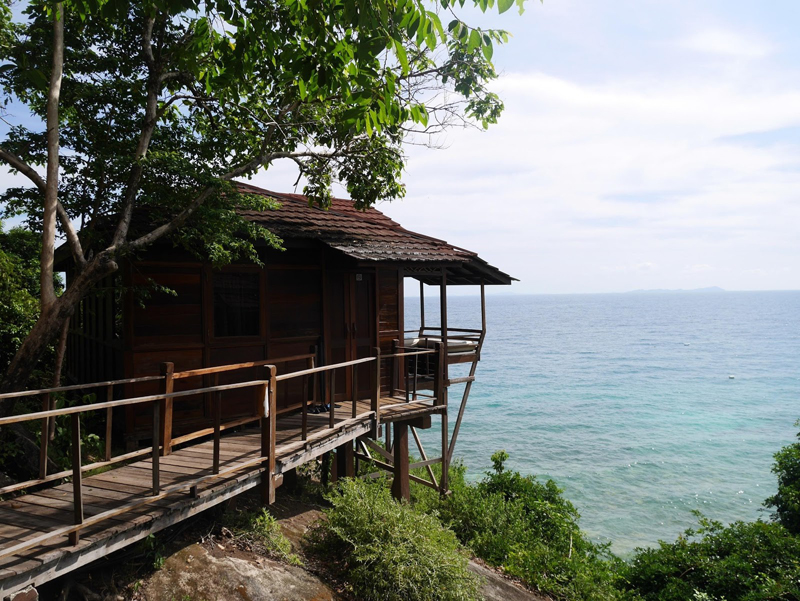 My impossibly luxurious cabin was hidden among the trees, just off a wooden walkway. The bed was huge, and I couldn’t help doing a few roly-polies across it…! 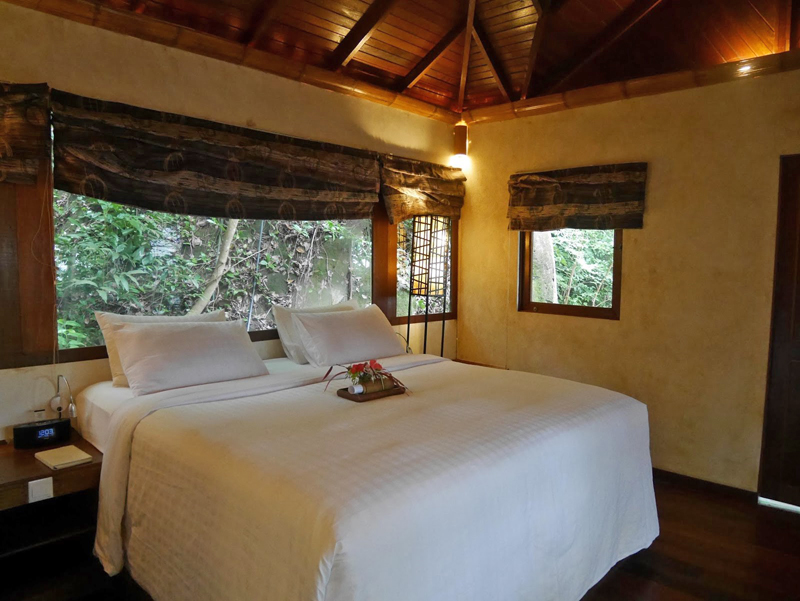 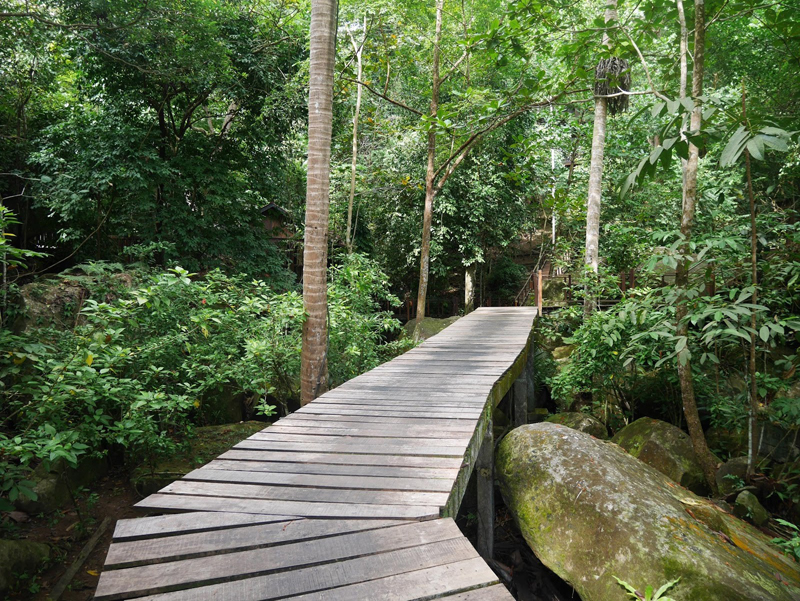 My days at Japamala began leisurely. Sitting on a swing on the beach, lemongrass and ginger tea in hand, I listened to monkeys screeching in the jungle, birds singing overhead and waves lapping at the shore. Afterwards I’d go snorkelling, spotting clownfish emerging from between the anemone, baby blacktip reef sharks basking beneath the jetty, and parrotfish darting from coral to coral. 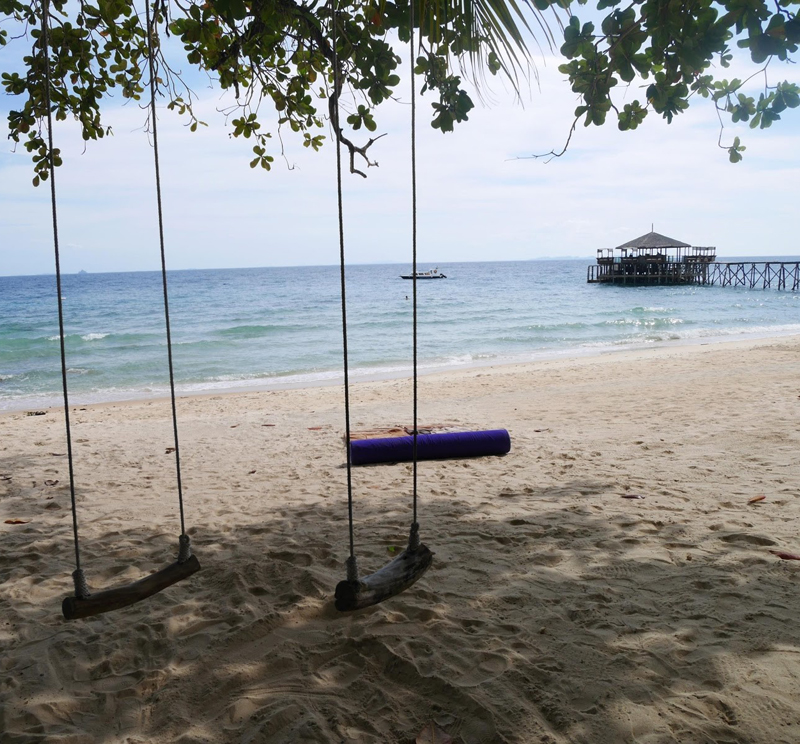 The food was spectacular. I feasted on crisp pizza for lunch, and a spicy Thai stir-fry for dinner. And I lost count of the number of fresh-fruit smoothies I slurped! The bar at the tip of the jetty was the perfect place to watch the sun set, and the complimentary cocktail was just a bonus. 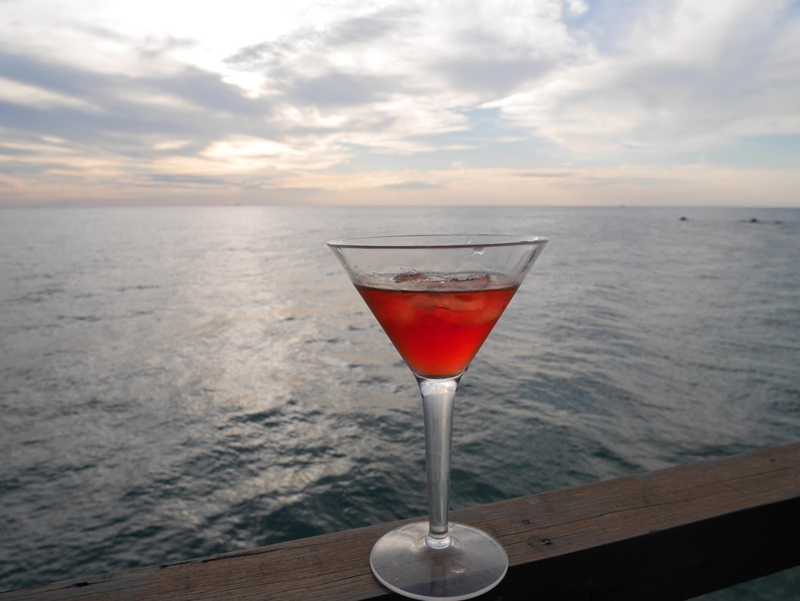 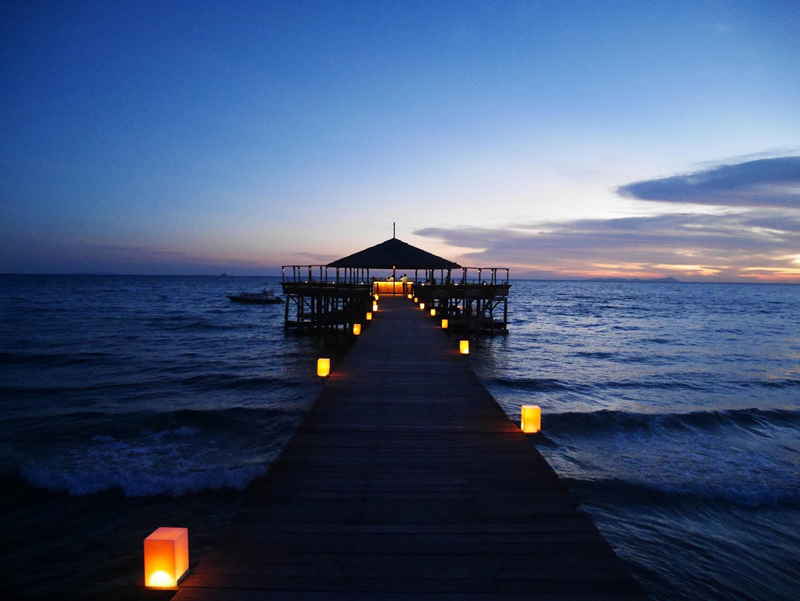 But a word of warning: ensure you stow all your belongings inside your cabin! I left a pair of shoes drying on the terrace, and came out of the shower to discover two had become one. The baby monkeys, while incredibly cute, are impossibly naughty! 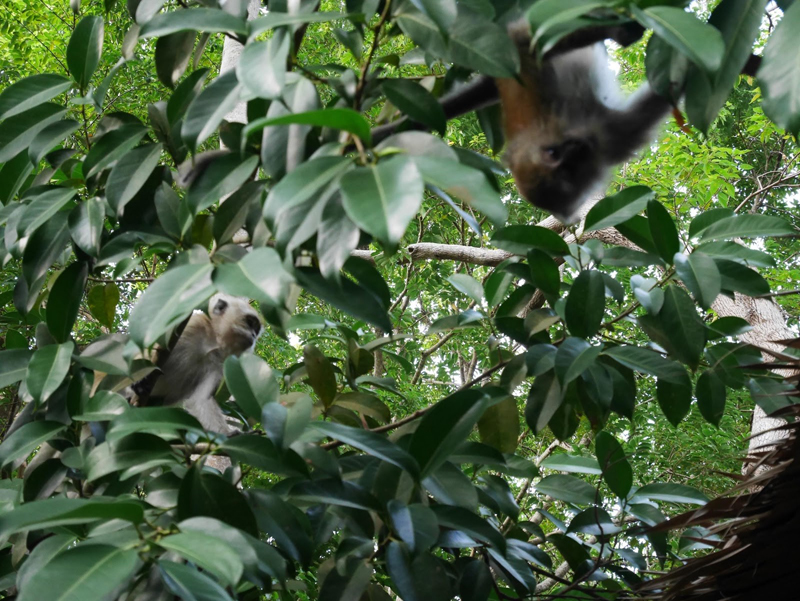 After a very restful stay and another two boats later, I was on my way west, heading for Kuala Lumpur. 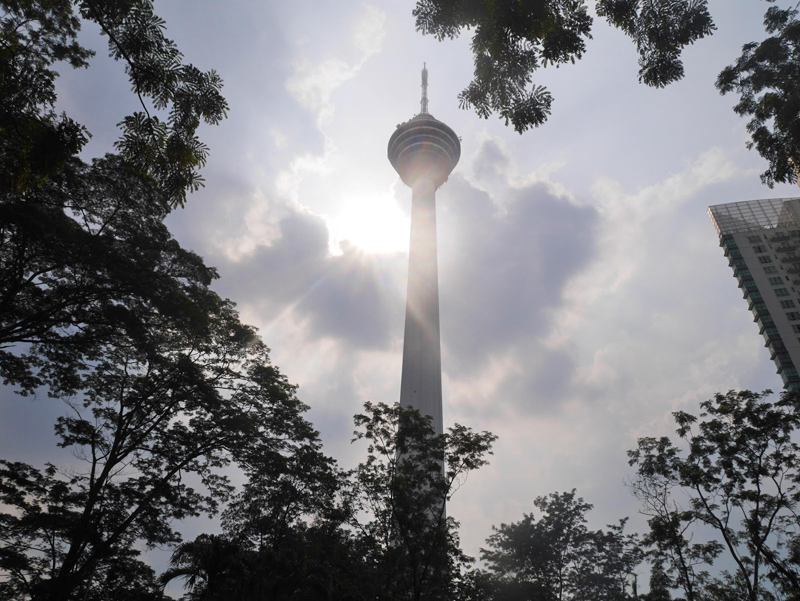 View our boutique hotels in Malaysia >> 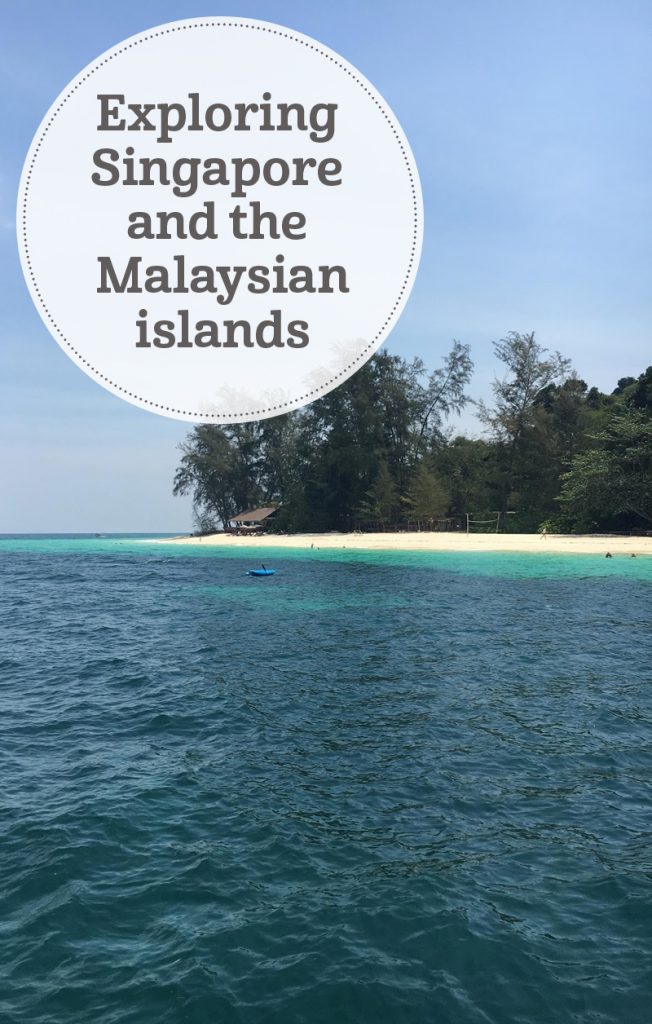