|In Beach escapes
|By Jake Hamilton 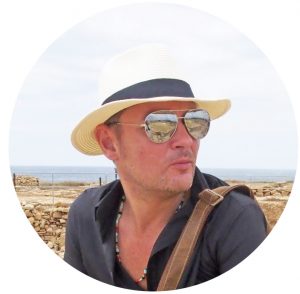 12 famous movie beaches with secret hideaways on (or near) the shoreline. 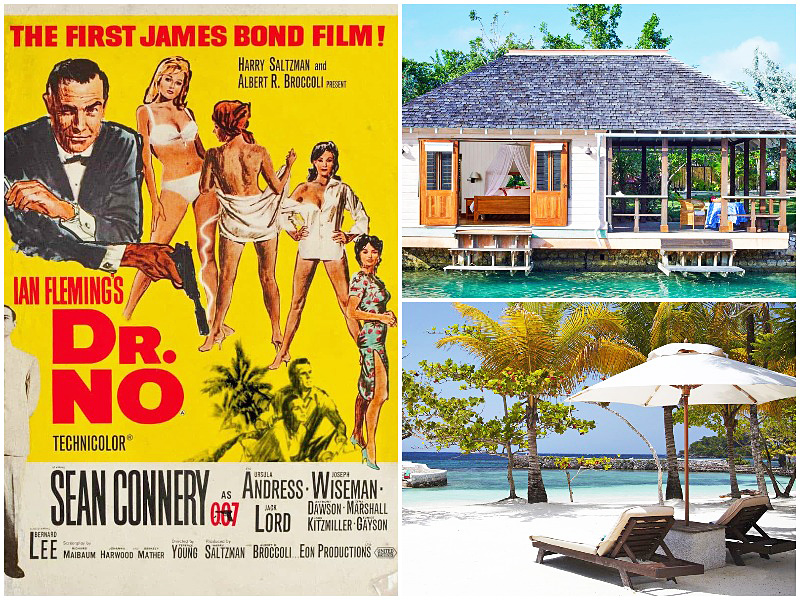 The beach: It’s one of the great entrances in movie history. Honey Ryder – shell diver, beachcomber, knife expert – emerges from the sea in a white belted bikini and meets 007 on a dazzling Caribbean beach. The film is Dr No. The beach is Laughing Waters near St Mary’s in Jamaica. It remains one of the most bedazzling movie beaches in the world.

The hotel: GoldenEye is the most famous address in Jamaica. This sumptuous high-end resort contains the villa where Ian Fleming wrote all his James Bond novels. Its 52-acre grounds include a lagoon and private beach. The stylish digs range from grand villas to funky beach huts. Laughing Waters is just minutes away. 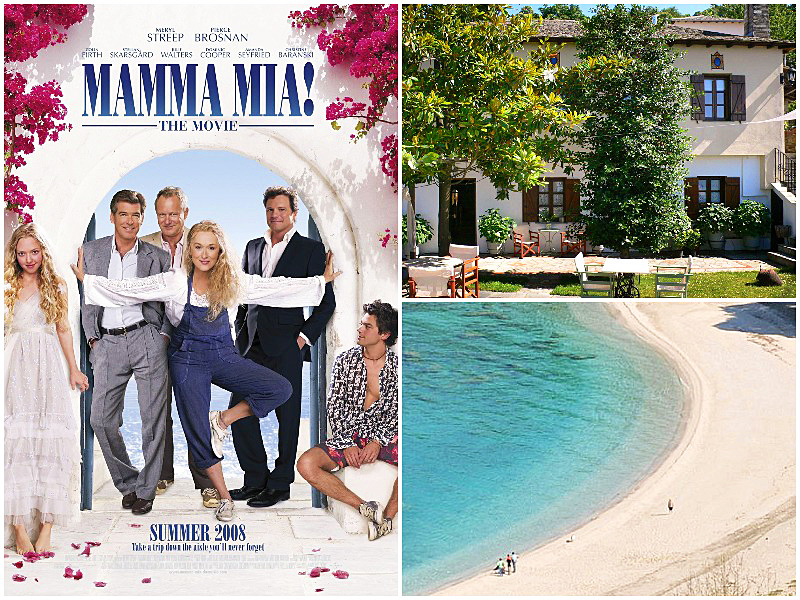 The beach: Can you believe it’s over 10 years since Donna danced down the pier before divebombing into the sea in her dungarees? Yet as you read these words, we bet someone is having the time of her life belting out Dancing Queen on Damouchari pier. This pretty little harbour on the Pelion peninsula is where the famous scene takes place.

The hotel: Located above Damouchari in the village of Mouresi, Hotel Olga is a stress-free hideaway with stylish vibes and fabulous prices. Owner Leni makes unbeatable breakfasts that will ruin you for all other breakfasts in the region. Just 10 minutes to Damouchari’s beaches.

The trivia: Such is Mamma Mia‘s impact on Greece tourism that Damouchari harbour is often called ‘Mamma Mia Cove’. 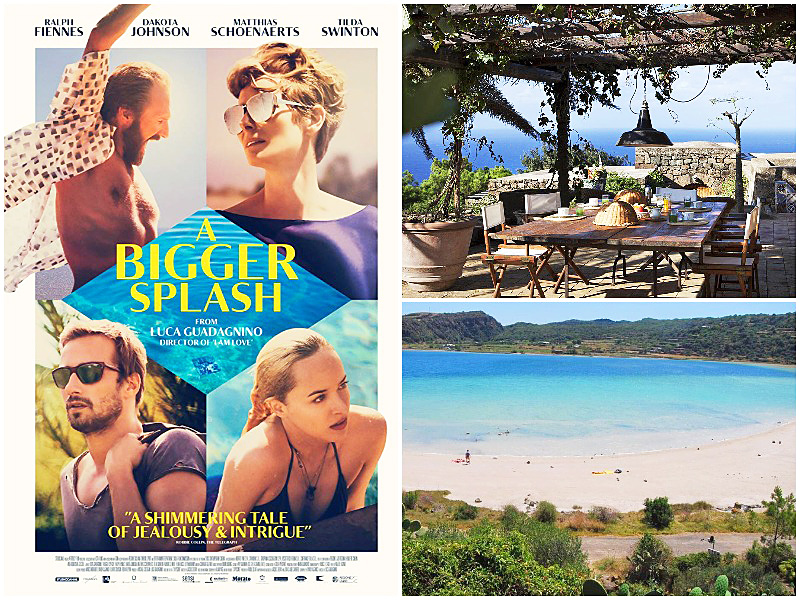 The beach: A Bigger Splash is one of those seductive summer movies that makes you want to move to the Med. The gobsmacking beach where Tilda Swinton swims is actually a volcanic crater lake on little-known Pantelleria island, near Sicily. The Mirror of Venus gets its name from a local legend claiming the Goddess of Love admired her beauty in its crystal waters.

The hotel: Tenuta Borgia is one of our favourite Mediterranean hideouts. It’s located on Pantelleria’s wildly beautiful south coast and has just seven Arabic dammusi (sleeping 2-8). You can sit on your private terrace and watch the sunset… over Tunisia! The coastal drive to Venus is a jaw-dropper.

The trivia: The ultra-sexy swimming pool in A Bigger Splash is found in Tenuta Borgia’s Grande residence (sleeps 8). 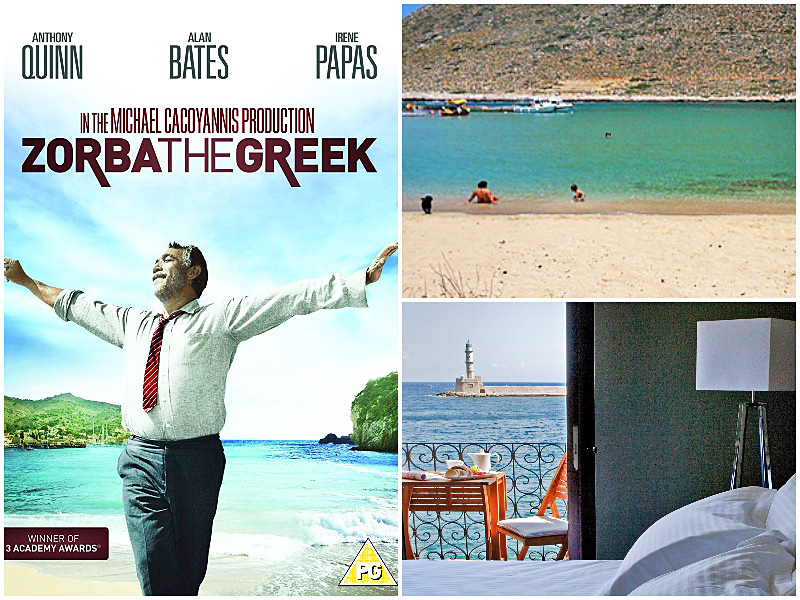 The beach: If you want to understand the Greek spirit, watch the final scene in Zorba the Greek. This now-legendary sequence where Zorba teaches Basil to dance the Sirtaki was filmed on Stavros beach, on Crete’s Akrotiri peninsula. The famous scene gave birth to a million renditions of ‘Zorba’s Dance’ in tavernas across Greece and beyond.

The hotel: Mama Nena is a gorgeous little B&B in the heart of Chania’s Old Town. It has just three bedrooms with French windows overlooking the picturesque harbourfront. Stavros beach is a breezy drive away.

The trivia: Explore the alleyways of Chania’s Old Town, where most of Zorba was filmed. 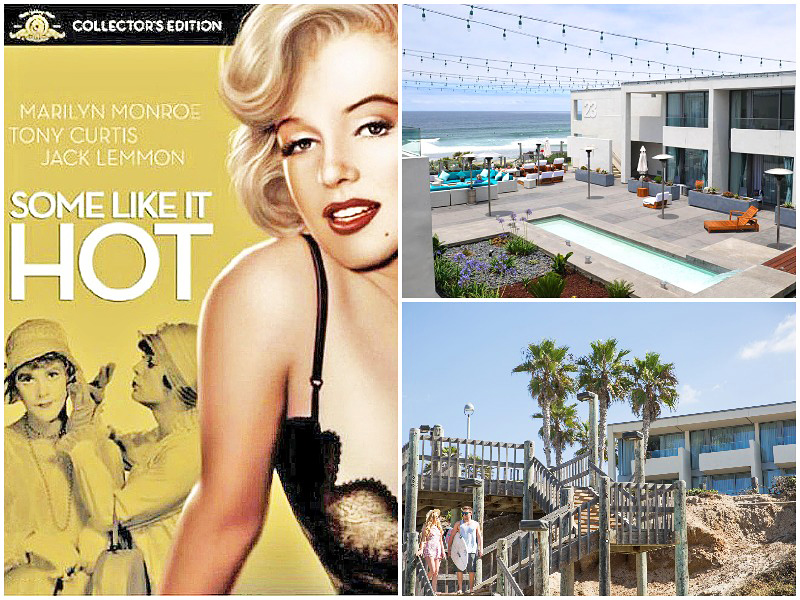 The beach: Marilyn Monroe is at her barnstorming best in the outrageously funny Some Like It Hot. She plays Sugar, a jazz singer who stumbles (literally) across a multi-millionaire on Coronado beach, and sparks fly. San Diego’s superstar beach looks just as beautiful today as when Marilyn graced its golden sands.

The hotel: Sleek Tower23 Hotel is a rarity for San Diego. It’s one of the few hotels that boasts a beachfront location. It’s also a stylish hideout attracting a young, happening crowd at the groovy bar and ocean-facing restaurant. Coronado beach is a 15-minute drive away.

The trivia: Amazingly, Coronado beach sparkles in the sun thanks to mica deposits found in its golden sands. 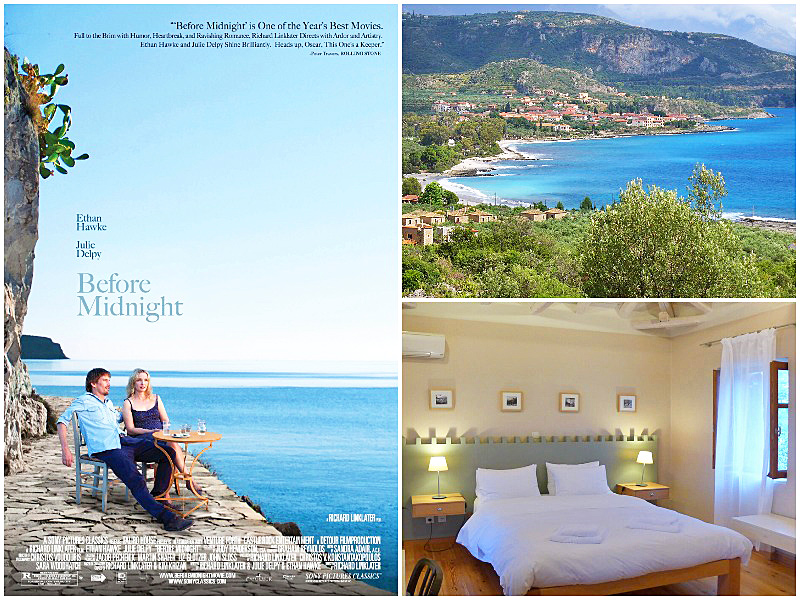 The beach: Sunsets will never look the same after watching Before Midnight. It’s the final film in the Before trilogy, and we see Jesse and Céline watching a devastatingly beautiful sunset while commenting on their relationship (‘Still there… still there… gone’). You can watch the same sunset at Kardamyli, where Before Midnight takes place.

The trivia: Jesse and Céline’s sunset bench is found a few minutes’ south of Kardamyli pier. 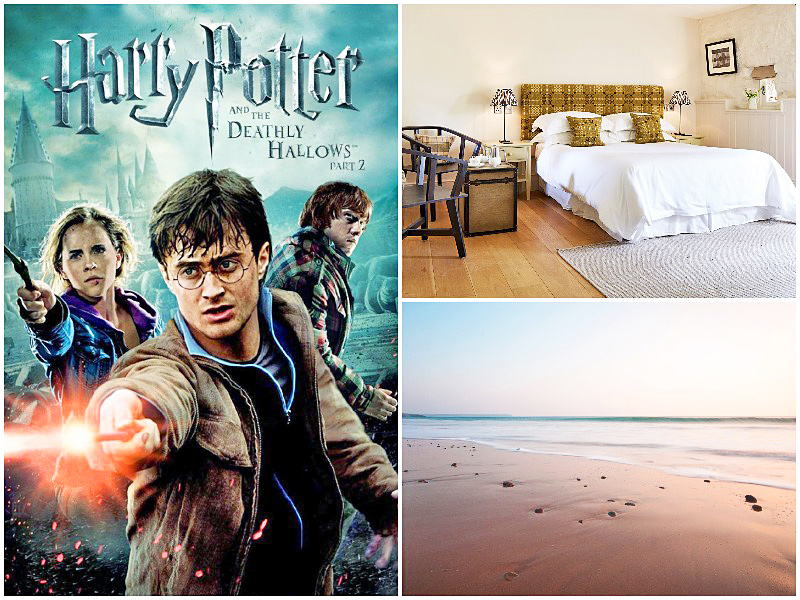 The beach: Oh no, a tearjerker! Remember that long golden beach in the final Harry Potter movie where Dobby dies in Harry’s arms? You’ll find it on the Pembrokeshire coast. Freshwater West is hands down the most cinematic beach in Wales. Surfers love it, as do hikers and the odd quidditch fanatic.

The hotel: The Grove of Narberth is a cosy country house hotel within easy striking distance of Pembrokeshire’s best beaches (plus pretty seaside Tenby). The individually designed rooms are top-notch. You can also explore the beautiful walled garden. Pets are welcome.

The trivia: Thanks to regular National Trust clean-ups, Freshwater West is one of the UK’s cleanest beaches. Get involved here. 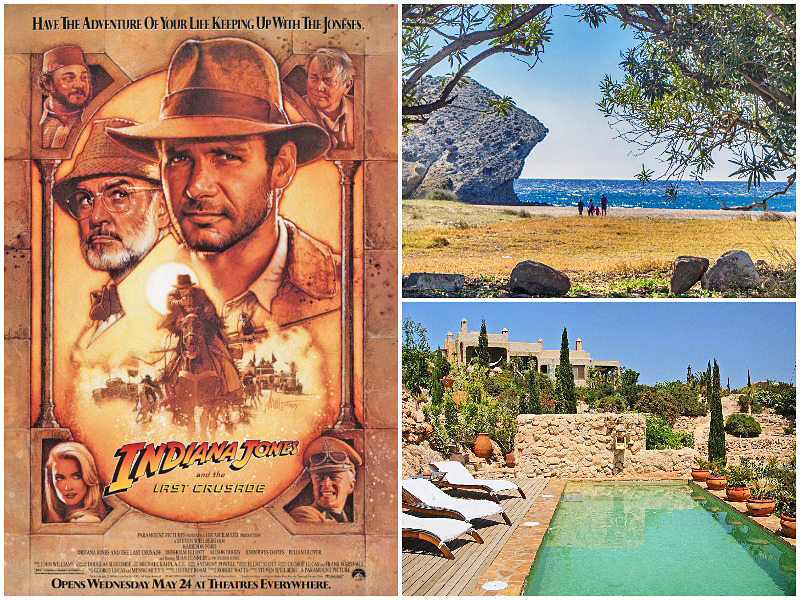 The beach: How do you bring down a fighter plane with just an umbrella? Simple, call for Indiana Jones’ dad. What makes the beach scene in Last Crusade so memorable isn’t Indy’s face when he realises his boring father is a badass. It’s the ravishing Mónsul beach, in Cabo de Gata National Park. Director Stephen Spielberg calls it ‘the best beach in Spain’.

The trivia: Mónsul beach is framed by a huge volcanic rock that provides perfect shade from the midday sun. 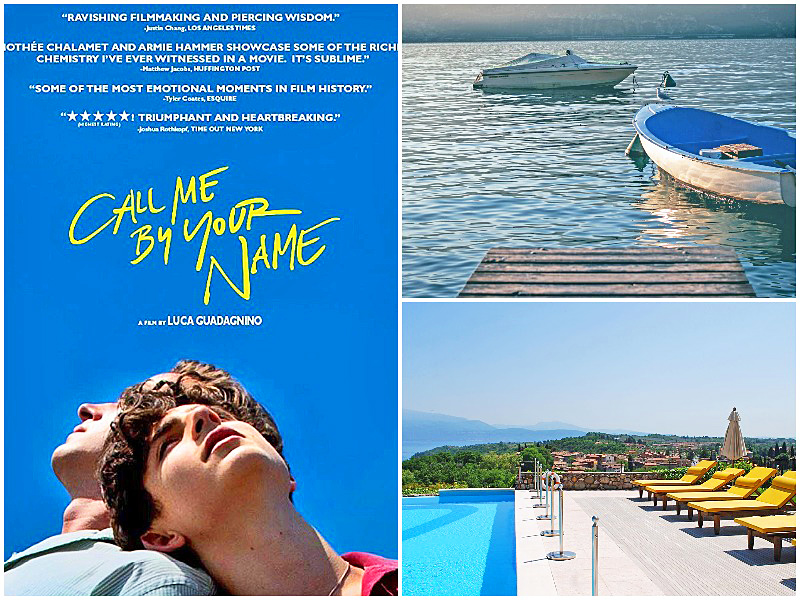 The beach: It’s summer 1983. Introverted teenager Elio meets free-spirited Oliver in northern Italy. So begins one of the most exquisite coming-of-age movies in modern cinema. The beach where Elio and Oliver take a fleeting twilight swim is called Jamaica beach. You can find it near historical Sirmione on Lake Garda.

The hotel: Elegant Villa Arcadio is hidden in the hills above Salò and has blockbuster views of Lake Garda. The rooms are drop-dead gorgeous and the swimming pool has movie-star looks. Private boat excursions to Sirmione are available.

The trivia: The cult of Call Me by Your Name has spawned sightseeing tours around Italy, including Milan and Venice. 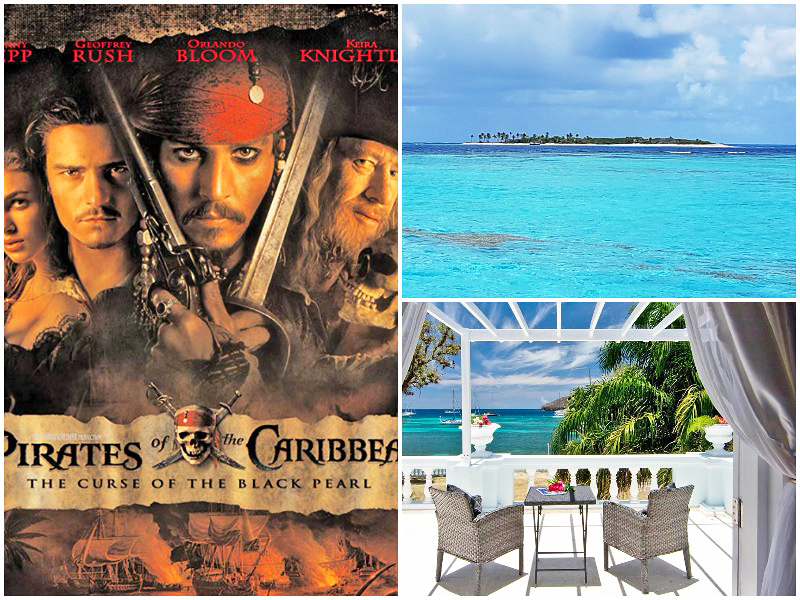 The beach: If you’re going to get marooned on a deserted island, make it the one in Pirates of the Caribbean where Jack Sparrow and Elizabeth Swan are stranded. It’s a stunning palm-fringed paradise called Petit Tabac. It’s a heavenly little island in the uninhabited Tobago Cays archipelago, the jewel of St Vincent and the Grenadines.

The hotel: Bequia Plantation Hotel is a stylish small hotel with a prime waterfront spot on Bequia Island. The rooms have technicolour views of Admiralty Bay, one of the prettiest harbours in the Caribbean. Bequia’s best beach (Princess Margaret) is a three-minute stroll away. The hotel arranges boat trips to the Tobago Cays.

The trivia: Petit Tabac is one of the finest snorkelling spots in the world, thanks to a protective outer reef called ‘World’s End’. 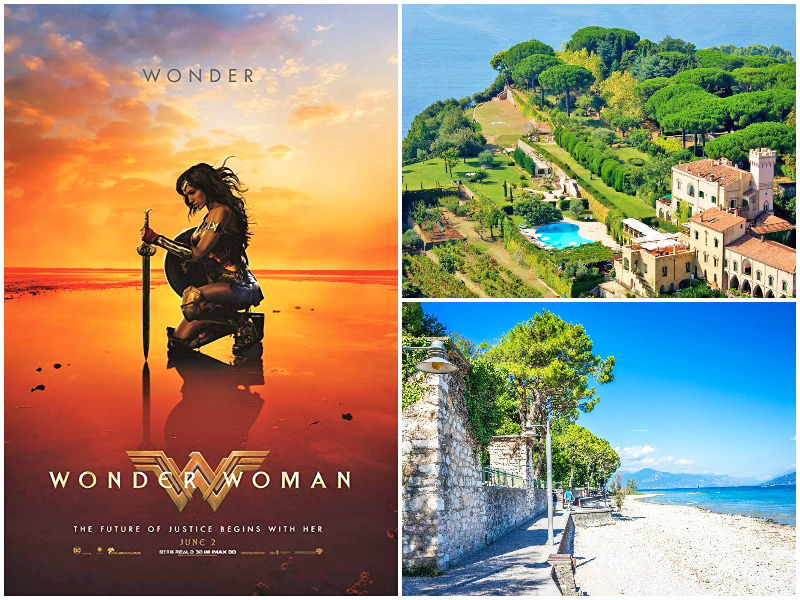 The beach: The all-female utopia in Wonder Woman shows our young superhero, Diana, living in perfect harmony with nature. This otherworldly paradise is the UNESCO-listed Ravello on Italy’s Amalfi coast. The town has a small secret beach that locals call the ‘hidden treasure’ of the Amalfi coast.

The hotel: The romantic palazzo Villa Cimbrone occupies the most audacious location on the entire coastline. It boasts the astonishing ‘Terrace of Infinity’ clifftop lookout – also featured in Wonder Woman. Gore Vidal called it ‘the most beautiful panorama in the world’ but even this can’t do it justice. 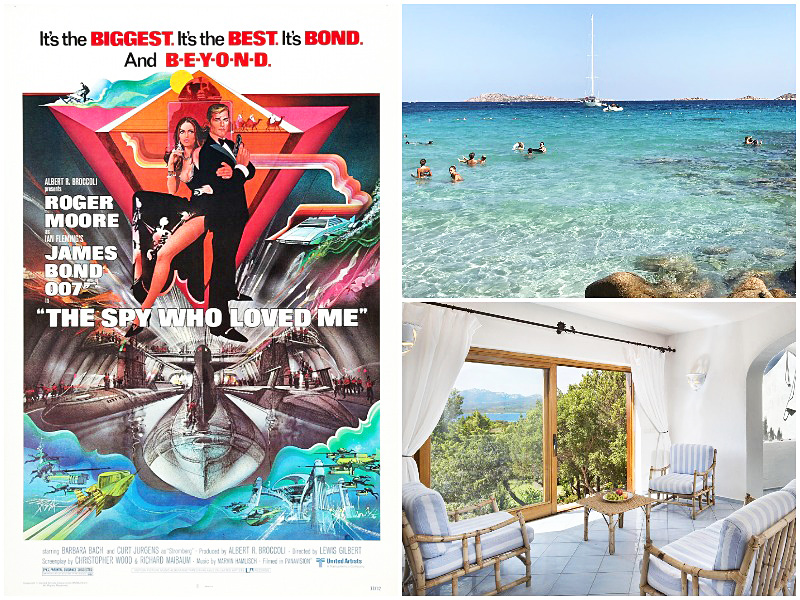 The beach: We end with another famous James Bond scene, this time from The Spy Who Loved Me. The late great Roger Moore drives his waterproof Lotus Esprit out the sea like a total boss, stopping only to drop a fish out the car window. The beach is Sardinia’s glorious Capriccioli beach, the crowning glory of Costa Smeralda.

The hotel: Smeralda Beach House is a trio of secluded whitewashed villas (sleeping 2-6) with a shared pool. The kitchens are simple but include coffee machines, dishwashers, ovens and fridge freezers.

The trivia: Smeralda Beach House has a little sandy path leading down to Capriccioli beach. Shh, it’s for your eyes only (oh, wait, that’s another Bond movie!)

Explore over 500 beach hotels in our Beach Collection